I AM THAT I AM Ex. 3:14. "This passage is intended to indicate the etymology of Jehovah [YAHUWAH], as understood by the Hebrews, no one has ventured to doubt." Smith's Bible Dictionary

"Etymologically . . . of the verb hawah (or hajah), signifying to be." Funk & Wagnalls New Standard Encyclopedia (1934) under Jehovah Exists or Self Existing in the sense of: "yesterday, and today, and forever." Hebrews 13:8 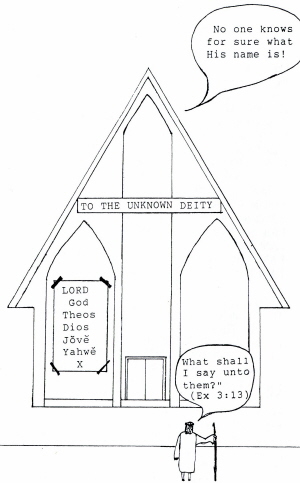 The note in the margin of the 1599 Geneva Bible sums it up well. "The [El] which ever have been, am and shall be: the [El] Almighty, by whom all things have their being, and the [El] of mercy, mindful of My promise." Ex 3:14

Though the Scofield Bible footnote on Gen. 2:4 uses Yahwe (?), it also states that the name is from "havah", or more accurate "hawah".

According to Gesenius Hebrew English Lexicon, pp.219-22, the Hebrew characters and vowel points used, one can see the NAME is derived from

(hayah), meaning to EXIST, SELF EXISTING.

"Many critics contend for Hebrew: Yahveh, some for Yahvah, and some for Yahaveh. It is generally derived from havah, an old form of haiah, meaning 'He is'. The import of the name is explained in the book of Exodus: 'And (Elohim) said unto Moses, I AM THAT I AM ...' (Ex. 3:14, thereby predicating self-existance in a sense in which it can be applied to no created being." The American Peoples Encyclopedia Vol. II, p. 599 (1952)

Many more references could be given as pointed out by Young's and Strong's Concordances, Funk & Wagnalls Encyclopedia, and Gesenius' Hebrew English Lexicon, page 337, 338. The name is derived from hawah (ha WAH). Combining Yah with Wah, we have the first and last part of YAHUWAH.

A statement by Alexander MacWhorter of Yale University in his book, Memorial Name, published in 1857, harmonizes with this, as he said the NAME is derived from the Hebrew verb "havah", the OLD FORM of "hayah", meaning to EXIST or SELF EXISTING ONE. This passage from Exodus 3:14 has not two parts, but three. Many have not noticed the middle section of the translation I AM THAT I AM. In Hebrew Asher means: who, which, what, that, are, etc. Another Hebrew word that often means the same thing is #1931 huw. Huw also means: this or that, which (is), who and he etc.

Huw and asher often mean the same thing, or can interchange. Example: compare the following passages and usage's of asher and huw.

See by these examples both asher and huw can interchange with each other!

Thus it becomes ultra important to have all three parts of the translation included as our proof for determining the true original set-apart name.

Which was, which is, and which is to come

Now that we have carefully considered both translations, we can also begin the process of elimination. If the set-apart name were Yahowah, which might be a corruption of the set-apart name, but cannot be the original, for then the translation must read "I AM oh I AM" or "I Am alas I Am," since the Hebrew word "how" #1930 (pronounced ho) and means Oh and/or alas.

Notice in the translation of Exodus 3:14, "I AM" is repeated, thus in the set-apart name YAH is repeated with WAH, both YAH and WAH mean basically the same thing. In Hebrew the Y and W can interchange and yet the same meaning is preserved. A couple of examples from Scripture are in order.

Take the name Dodavah, II Chronicles 20:37 (more proper Dodawah), which means love of Yah. Which part of this name means Yah? The wah of course! Let's do another. Hodevah (more accurate Hodewah) means majesty of Yah. Again the testimony of two men is true.

Are there Hebrew words where the

(waw) are interchangeable and the meaning remains the same or similar?

The translation of the Father's Name is "I AM that I AM." Notice that "I AM" is repeated. Since Strong's H#1961 (hayah) and #1933-1934 (hawah) both mean "to exist," His Name covers the aspect of His past, present and future existence. So, in the Father's Name, Yah is repeated with Wah. Are the yod (y) and the waw (w) interchangeable? Let's find out... Remember, Hebrew is read from right to left. 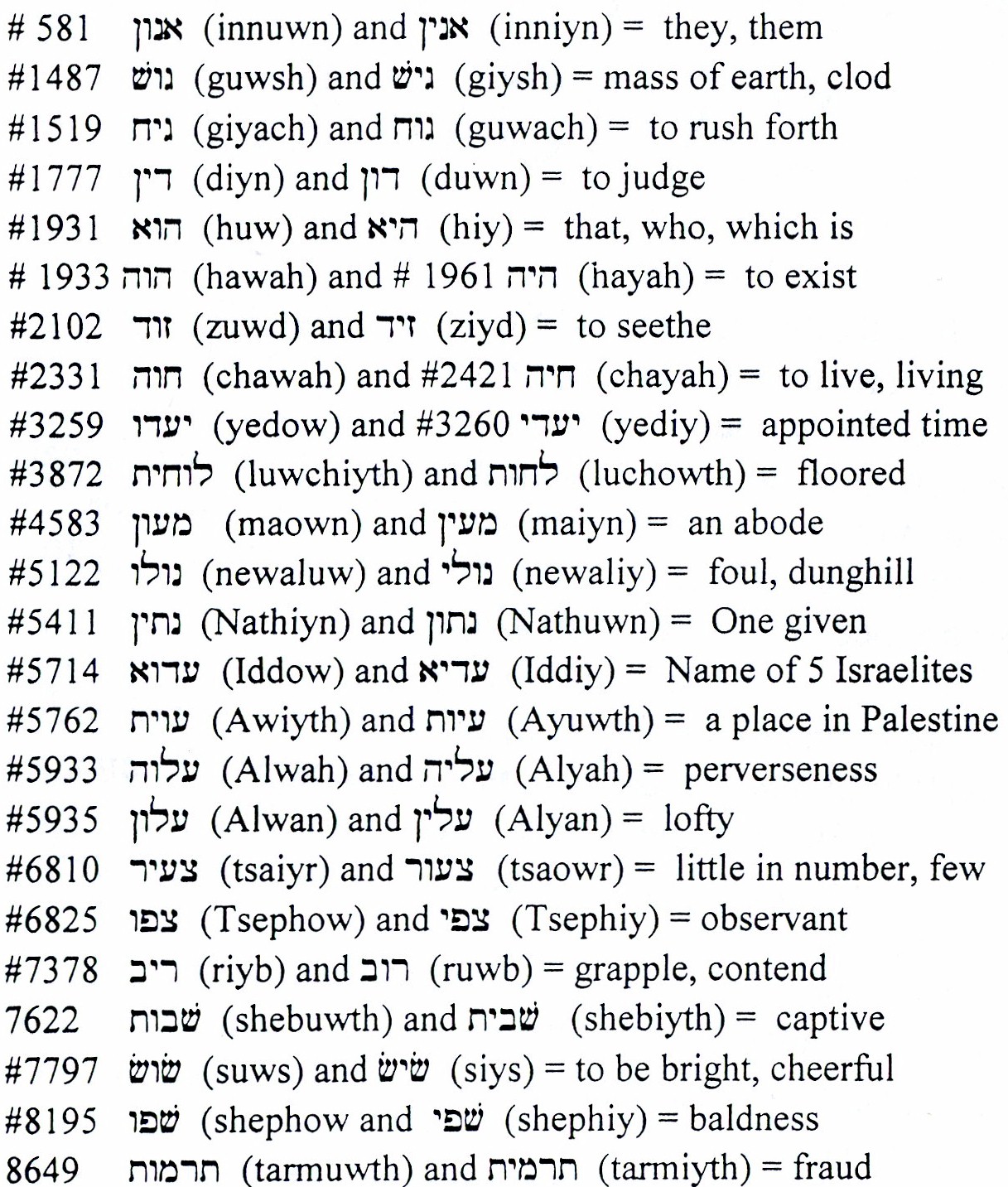 Sometimes scholars get it right though they come at it from a different angle.

"Among etymologies proposed, S. Mowinckel and J. Montgomery contend that the name is a compound, yahu or yahuwah, 'O He!'. "6 (An Arabic angle). James Montgomery shows sort of a secondary translation in his study THE HEBREW DIVINE NAME AND THE PERSONAL PRONOUN HU, where he touches on the basic theme "I am YHWH" and it's parallel, "I am He".7 Tracing the Biblical references in Deuteronomy 32:39 for "I am He" to Isa. 41:4; 43:10, 13; 46:4; 48:12.

It is also interesting to note that when Judas and the band of officers came looking for YAHUSHUA in the garden of Gethsemane: "YAHUSHUA therefore knowing all things that should come upon Him, went forth, and said unto them, 'Whom seek ye?' They answered Him and said, 'YAHUSHUA of Nazareth.' YAHUSHUA saith unto them, 'I am He....' As soon then as He said unto them 'I am He', they went backward, and fell to the ground." (John 18:5,6). The possibility does exist here that He spoke the set-apart name. The Greek words are the same as used in John 8:58, "Before Abraham was, I am," which is the same Greek usage the Septuagint uses in Exodus 3:14, "THE BEING". There is more from the book of John:

The King James translators knew this, and thus italicized "He" to indicate this connection with Ex. 3:14.

The main thing this bares out is that "He" in Hebrew is "Hu", thus verifying the element Hu instead of "Ho" in the set-apart name.