The Jewish Cover Up:
"Don't Mention the Set-Apart Name!"

The conspiracy to cover up the set-apart name goes way back, even as far back as the days of Eliyah. The religious leaders thought that they would get along better with religiondom around them if they used a common title they could all agree on; Baal means Lord (see Hosea 2:16 margin KJV). After all, they reasoned the Creator is Lord or Sovereign; by this they could be in ecumenical harmony with everyone about them. Eliyah thought differently. To Eliyah truth mattered.

Even as far back as 787 B.C.E, Amos tried to show the children of Israel the folly of their reasoning about not mentioning the set-apart name. . . "Hold thy tongue: for we may not make mention of the name of YAHUWAH." Amos 6:10.

When the Jews were carried into Babylon 606 B.C.E, many of the personal names had the element "yahu", thus came the slanderous term "yahoo" for folk who seemed uncivilized like those barbaric beard-wearing Ju's or Jews (Interesting to note, in the 1611 KJV is a word spelled "Iurie", the modern KJV has "Jewry", and Matthew is really Matithyahu).

Perhaps they meant well in covering up the name, because they were afraid the Babylonians might desecrate the set-apart name by using it in a profane way. This might seem like good logic at first, but the Jews went into captivity because they were not concerned with the name to begin with. The prophet Jeremiah rebuked the Jews about the time of the Babylonian captivity, for trying to cause the people to forget His name.

"How long shall this be in the heart of the prophets that prophecy lies? Yea, they are prophets (or preachers) of the deceit of their own heart; which think to cause My people to forget My name by their dreams which they tell every man to his neighbor, as their fathers have forgotten My name for Baal." Jeremiah 23:26, 27

Satan and his evil angels hate hearing the set-apart name being praised and exalted. It has been his constant effort to remove the name, through culture and time, and slip in titles, that he might direct the worship to himself. "In Egypt, for example, the concept of the 'concealed Name' was extremely common." The Encyclopedia of Occultism & Parapsychology

"In Gnostic thought, the concrete is resolved into the abstract. Personal names are replaced by terms of philosophy; mythological figures are changed into qualities and attributes and events into cosmic processes. [Hence, the personal name (YAHUWAH) becomes the attribute 'Lord'.] In many religions the god represents a thing such as Aeolus, as personification of the wind. [Hence the personal name Lucifer becomes a thing 'morning star'.]" (quoted in New Age Bible Versions)1

The prophets of old wrote more about the last days than their own time. For they saw the big picture, that the things they were experiencing was only a foreshadow of the end times, or types for the last days (I Cor 10:11); thus Jeremiah was mostly talking about the end time preachers who cause the people to forget His name for Lord. 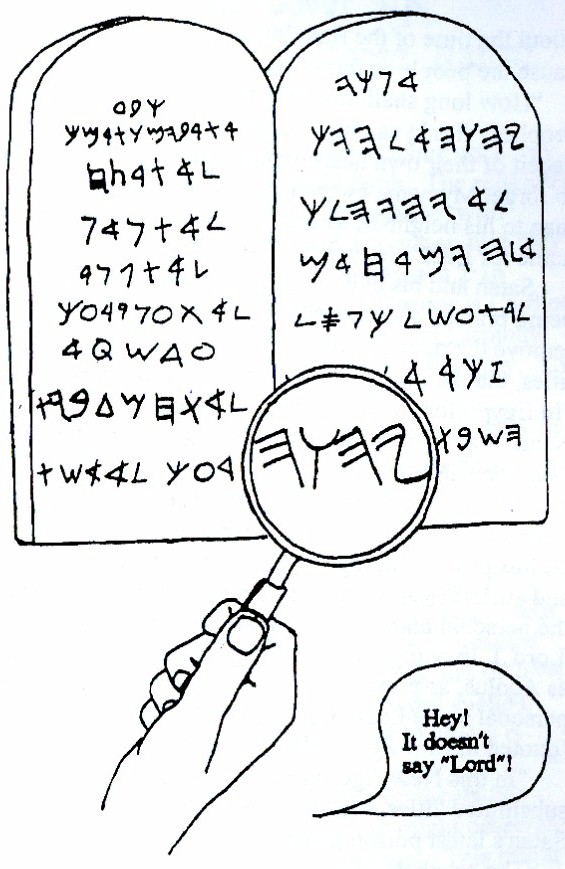 Baruch, the scribe of Jeremiah, wrote (mostly for the last days): "I will scatter them. For I knew that they would not hear Me: because it is a stiff-necked people: but in the land of their captivity they shall remember themselves, and shall know that I am YAHUWAH their Elohim: For I give them an heart, and ears to hear. And they shall praise Me in the land of their captivities, and think upon My name. "And for this cause Thou hast put Thy fear in our hearts, to the intent that we should call upon Thy name, and praise Thee in our captivity." Baruch 2:29-32; 3:7 (KJV Apocrypha)

In the Messiah's time, the Jews were still in this mode of not mentioning the Creator's name. YAHUSHUA had constant controversy with the religious leaders and tried to show them that their traditions caused them to break the commandments.

One example of our Saviour uttering His Father's name, was when He got up to read the scroll in the synagogue on Sabbath. He read from the prophet Isaiah. When He read the portion He bypassed all Jewish tradition and simply read the Scriptures just as they read. When He came to the tetragrammaton, He did not say "Adonai" or "Lord", but simply spoke His Father's name.

"The Spirit of YAHUWAH is upon Me, because He hath anointed Me to preach the good news to the poor; He hath sent Me to heal the brokenhearted, to preach deliverance to the captives, and recovering of sight to the blind, to set at liberty them that are bruised. To preach the acceptable year of YAHUWAH." Luke 4:18, 19 (quoting from Isaiah 61:1, 2)

"And He closed the book, and He gave it again to the minister, and sat down. And the eyes of all them that were in the synagogue were fastened on Him." Luke 4:20

Did He realize what He had just done? He transgressed the tradition of the elders. The Jews considered it blaspheme to speak the set-apart name, and thus the punishment of Lev. 24:16. The common people didn't mind too much at first, they did think it was a bit brave of Him. But the synagogue leaders instigated things and ended up attempting to throw this radical Jew off the edge of the cliff for blaspheming and uttering the set-apart name, lest a plague should break out and everyone start mentioning the name.

Another place YAHUSHUA mentioned the name is in Matthew 22:44, quoting from Psalm 110:1; this is indicated in the English text by putting all capital letters "LORD". This leads us to ask, "How many other times did He mention His Father's name when quoting from the Old Testament?" Obviously every time! He was a "user of the true name" in His day. I'm sure He didn't over use it, to the point of being obnoxious.

It is Scriptural to mention and praise the name of YAHUWAH, "by Thee only will we make mention of Thy name." Isaiah 26:13

Another example of the Jews avoiding the name is in Mark 14, where YAHUSHUA is brought in before the high priest at His trial. The high priest asked, "Art thou the Messiah, the Son of the Blessed?" When he said "Blessed" it was to avoid the name. What was YAHUSHUA's reply? The English says "I am", but the Greek is the same as the Septuagint for Ex. 3:14, THE BEING. But YAHUSHUA was speaking Hebrew to the high priest and possibly said the set-apart name, at least the translation. It was as if YAHUSHUA corrected the high priest and said, "you mean YAHUWAH".

But the response of the high priest gives it away also.

"Then the high priest rent his clothes, and said. What need we any further witnesses? Ye have heard the blasphemy: what think ye? And they all condemned Him to be guilty of death." Mark 14:63-64

What was the counsel of Moses? "Because I will publish the name of YAHUWAH: ascribe ye greatness to our Elohim." Deuteronomy 32:3

The name Yehovah came about as a result of an attempt, by the Jews, to cover up the set-apart name. Example: When a reader, in the King James Version, comes to "LORD God", the Hebrew words and vowel points are "Yehowah Elohim". But, instead of a Jewish person speaking the set-apart name, the scribes put vowel marks on the tetragrammaton to indicate for the reader, to say "Adonai Elohim". But when a reader in the KJV comes across "Lord GOD" (as in Ezek. 33:27), in Hebrew is "Adonai Yehowih", because in this instance the tetragrammaton has the vowel points of Elohim. Otherwise the Jewish reader would say "Adonai Adonai" [twice], so to avoid this, they vowel pointed it to indicate to the reader to say, "Adonai Elohim". You will notice that the vowel marks on the Tetragrammaton in Ezek. 33:27 differ from the vowel marks used in Exodus 9:1.

Peter Galatin simply read the Hebrew as it was, without the special instruction to say Adonai. Thus, he must have thought he came upon a new revelation of how to pronounce the set-apart name. The message of Eliyah was to restore the set-apart name to its proper use.